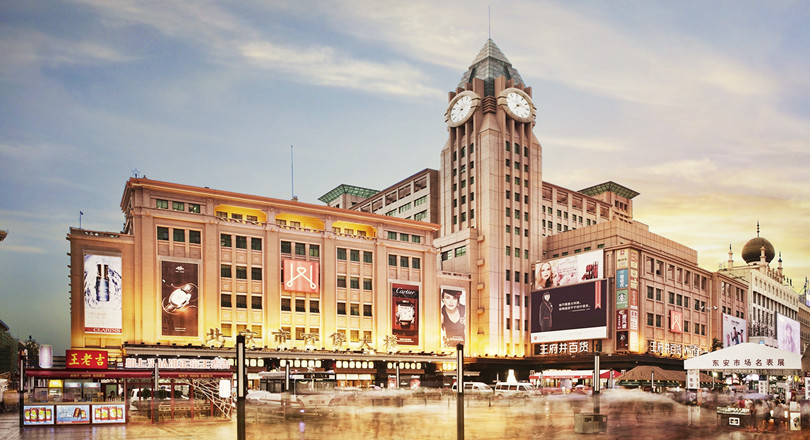 Wangfujing Group Co.,Ltd, Hereinafter referred to Wangfujing Group, is the largest domestic retailing group concentrated on the development of retailing business. Meanwhile, be loved by Billions of Chinese customers.

Wangfujing Group, whose predecessor, Beijing Department Store enjoyed the domestic and overseas reputations as the first Store of New China, founded in Sep.25.1955. In 1990, Beijing Department Store Group was organized, and the annual and long and medium-range plans of Beijing national economic and social development were independently pursued. The transformation into the joint stock system was conducted , the company was listed in Shanghai Securities Exchange in 1993, than successively listed in the Shanghai Securities Exchange 30 Index, Shanghai and Shenzhen 300 index, SSE 380 index. The company has started since 1996 to promote the chain and scale development of department stores throughout the country. In 2000, the Group completed the strategic restructuring with Beijing Dong’an Group, enlarge the market share in Beijing area. In 2004, the company was listed as one of the 20 large circulation enterprises especially supported by the Ministry of Commerce of China. In 2010, successfully widen the capital scale) by being invested from several investment corporations. In 2013, Wangfujing International, the majority shareholder of Wangfujing Group acquire PCD Store (Group) Limited, greatly expanded Wangfujing 's territory and Group format mode.

Wangfujing Group has started to promote the chain operation throughout the country, and created the network of chain in South China, Southwest China, Middle China, Northwest China, North China, and Northeast China six economic region. More than 30 stores have been open in 22 cities, develop a set of market position which not merely meets theirs own advantage, but also match the local demands.

In the year of 2013, Confronted by the increasingly stronger competition of E-Mark Shopping and Innovation trend, Wangfujing Department Store has recruited Mckinsey & Company and IBM Company to be consulting partners for strategic transformation and Wangfujing Group’s full channel application. Facing the future, Wangfujing Group, the new lease of modern corporation is ready to form a new era of consumer sovereignty.

In the distant future, Wangfujing Group always will be the most attractive and most personality consumption city for Billions of Chinese customers and all oversea friends.
Wangfujing Department Store Group ©Wallbase.cc,2013